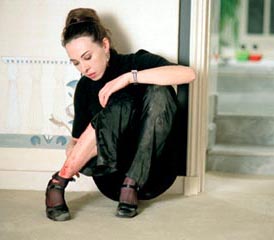 Youngish corporate woman slices her leg up real bad at a party, doesn't feel a thing, and then feels compelled toward cutting. Whatever. I was mistakenly under the impression that this would be really good and it wasn't even passably good. Plods along like a movie that means something, but never told us why she liked to prick herself with steak knives or made us empathize with her addiction. Esther's inability to feel pain requires her to create a visual and corporeal representation, maybe? Maybe not. Sicinski momentarily compared it to American Psycho in terms of the desensitizing nature of corporate politics. That's intriguing, but when left to the film itself it's not something of which I was entirely convinced.

Oh well. Someday I'll forget all about this one and it won't make a difference whatsoever. During the last ten to fifteen minutes In My Skin was a tad shocking and graphic, but the rest wasn't too bad...although I'll admit we're a rather poor yardstick for that kind of thing.

If we were willing to dish out extra points it'd be for the fact Marina de Van wrote, directed, and starred. That's pretty cool!
at 21:51
Labels: 2002

What, no jokes about this?