Sons of Anarchy -- Season One 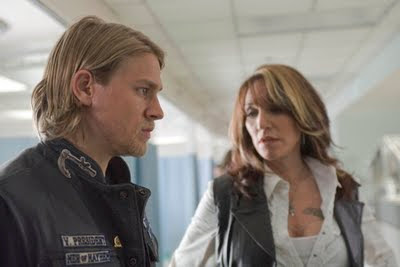 This felt like a TV show so I quickly lost interest, but Katey Sagal was so good I stuck around through the finale.
at 11:38 No comments:
Labels: FX, TV Party

Let's see what I wrote about Shakes the Clown on the Electrical Audio forum all the way back in July of 2006:

that one clown, she has the peanut butter pussy: brown, smooth, and easy to spread.

doesn't adam sandler have a cameo?

only saw some of this on hbo over ten years ago. time to netflix it.

when i was but a mere child I thought bobcat was hilarious.

Wow, I'm actually pretty impressed with this comment. I know it's a prime example of internet-bred triviality, but look at how well it encapsulates the Highland Cinema's style! Notice how now that I've finally sat down and watched this thing I still don't have anything to say 'bout it other than a vagina joke and a memory from my childhood. Can you think of a better juxtaposition? Didn't think so!

The one thing that really really sticks in my craw is my damn "cameo" remark. Talk about ignorant! Sandler's in over half of this darn movie and there I am acting like he was Glenn Close in Hook. Now Steve Albini will never think I'm cool.