Moscow on the Hudson

In Soviet Russia country defects from you.

Zing! Patent office, here I come! Lines like that will change the world they will. Don't steal my material.

Eh, this movie sucks, but it sucks in a very KCAL-9 Cocktail kind of way (simplistic Hollywood swill that's kinda charming). It's jingoistically offensive (CCC of P = hella lame, US of A = supercool!) and you'll be hard-pressed to find anyone onscreen who isn't a caricature. Just look at that goddamn poster right there! Can you tell this came out in 1984?

Director Paul Maz hits you over the head with his cornball patriotism for an hour and forty, and right when you think he's done with it all he throws you the lamest scene yet. I thought Robin Williams all drunk and beaten up, disillusioned with the American Dream signaled a turn away from sappy indoor bullstuff, but then BAM! a montage of late night coffee shop immigrants reciting the Pledge of Allegiance proved me wrong. Good grief. You could hear the Cinema cringe and roll its eyes three towns over. I didn't think I'd see something more idiotic than that Keystone Kops inspired scene of KGB agents chasing Robin around Bloomingdale's, but I guess that's what happens when you assume.

At least Big Robs wasn't annoying or smug and arrogant like he is in everything else. And Maria Conchita! Why, she's a KTLA/Superstation staple and perhaps our favorite Arnold co-star. Check her out in a scene the powers-that-be will cut from basic cable. Be sure to keep your eyes peeled for the Family Matters grandma, obligatory Yakov, and uncredited Udo Kier -- that guy just keeps showing up at the Cinema and we don't even invite him.
at 01:49 2 comments:
Labels: 1984

Man, if this isn't the most intense story we've ever come across. Extreme Calvinist devotion and dedication to the sacred vows of holy matrimony, all told through the lens of sexualized power relations. The box cover synopsis feels a bit misleading -- while the story does concern a wife's entrance into promiscuity in order to appease her newly-paralyzed spouse, the film is far more an Old Testament tale of isolated religious faith (a faith of both God and Man) than it is a sordid collage of stranger-lovin'. Lars von Trier's proto-Dogme realism makes things uncomfortable, but the film never feels exploitive, graphic, or manipulative, something I can't say for the only other von Trier joint we've seen (cue horribly depressing conclusion, cue uncontrollable sobbing).

I like how Breaking the Waves has my gray matter tied up in knots, but I ultimately think it's a bit of a failure. It's not Lars' fault, it'd be a Sisyphusian task for anyone to filmically realize the sheer gravity of this story. I will concede that the final twenty minutes are superbly effective and nearly make up for the shortcomings of the preceding 120.

Had Helena stayed on board we'd have had a completely different movie, and perhaps a better one. Emily Watson brought the provincial innocence like you can't believe, but I think Bess needed more of the crazy.
at 01:01 1 comment:
Labels: 1996, Emily Watson, Lars von Trier

This movie'd be nothing without Nick Cage and Alison Lohman. Had the studio given this flick to some schlock director instead of a name like Ridley Scott, we'd have ended up with forgettable garbage instead of something that's actually pretty good and really well done. It's still not a great movie (reasonably lighthearted Hollywood caper stuff), but the interaction between these two actors is so A-plus money amazing that it's a shame I woke up thinking about this rather than this. Cage and Lohman's father-daughter chemistry is the reason you should queue this; once you see it you too will be taken aback by the astonishing collision of nervous tics and excitable adolescence. It's truly the stuff of a four-star classic, my friends. Too bad the rest of the movie only gets ya chuckling and grinning -- no lasting or profound emotions will shuffle through your noggin this time. But, hey, it's not like fun's a bad thing.

I hear-tell that this here Terrence Malick is some sort of philosophical genius. I totally dig that, don't you know, but it's a tad unfortunate since it means that if watching this movie wasn't already hard enough, I've still got to write about the darn thing. And with dasein scholars in the room I'll have to watch what I say and how I say it. You know those philosophy types, they have to determine what the meaning of "is" is. Me? I haven't even read Being and Nothingness! (Although I do know Satre is smarter than this guy.) 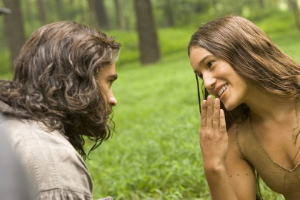 We'll leave ontology out of this for now, and instead I'll assure you that every single goddamn shot for the entire two hour run time is both undeniably gorgeous and unpretentiously contemplative. The New World is so visually striking you'll feel bad your living room set's only 20 inches. I did. And how 'bout those twenty minutes where brooding-eyebrows Farrell and fawn-ing Q'Orianka Kilcher fall in love? Among the greatest performances captured on film, and I'll stand on Renee Jeanne Falconetti's coffee table in my cowboy boots and say that. We had some real emotions welling up inside us during some of those scenes what with all the red lips, fingertips, and silent stares. So good you'll want a ladyfriend by your side. Maybe two.

But the forty-five Xian Bale minutes are boring.

Requiem for a Dream

Is there a Golden Globe for most difficult montage? Tonight's thoughts also included:

Keith David: Navy ads will never be the same 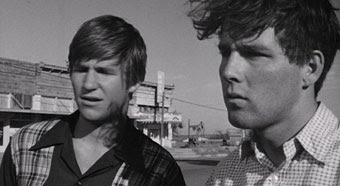 This movie is fantastic. Stop what you're doing and put it at the top of your queue.

Great imagery, expertly executed diegetic sound, and uniformly great acting, much of it by actors you didn't think were that good in the first place. Big Pete Bogs is the real deal, and it's a crying shame that it took us so long to see this. I can't say enough good things about this movie other than it convinced us that much more that Imperial Cruisers sounded the death knell of the motion picture industry.

Call this Rambo and you'll find yourself at the receiving end of the Cinema's fists of fury.

If you ask me, Johnny should've shot himself in that last scene like the good lord intended. Thankfully no one did ask me and now this, this, and this are part of our cultural history.

You should also know that Dan Hill's end-credits tune totally sucks out loud. I'm not sure I want to live in a world where I find myself wishing Frank was on the mic, but for a good two minutes that's where I was. Almost ruined a perfect UPN Sunday afternoon.
at 16:44 1 comment:
Labels: 1982

Jonathan Richman -- Take Me to the Plaza Man, do I ever dig this Jonathan Richman. Normally the Cinema is doom, gloom, and mayhem, but Jonathan never fails to get me smilin' and sighin' with his super-sweet tales of romance, neon signs, and New England. So sappy, so corny, so unbelievably great.

Nothing else to say.

The Making of Taxi Driver

Be sure and watch this when NetFlix delivers your copy. The darn thing's like an hour and a half long. Cinematographers and actors will tell you everything you read here, and then a little bit more.

If I played the guy that got my hand shot off you can bet I'd have that pic of me smoking with a knife jabbed thru my palm hanging right there in the living room. Sort of lame they interview Peter Boyle on the Raymond set. And why the hell is Albert Brooks in sunglasses? What a douche. Almost has me rethinking my position on Defending Your Life.

I just wanted to write another post. I don't plan write-ups for all the extras.
at 14:27 1 comment:
Labels: Fuck You George Lucas, Marty Scorsese

I like this and this, but wasn't too hot on this. Sporadically an enjoyable mystery, but the collision between old- and new-world faiths was completely lost on us. What the hell do I know about moon-dancing or Jesus? That said, the finale was surprisingly more effective what with its naked depictions of blind faith.

The powers that be sent us the truncated and probably lamer print. I was upset when that happened with this flick, but this time I don't feel cheated. Maybe the remake is good.
at 00:29 2 comments:
Labels: 1973
Newer Posts Older Posts Home
Subscribe to: Posts (Atom)