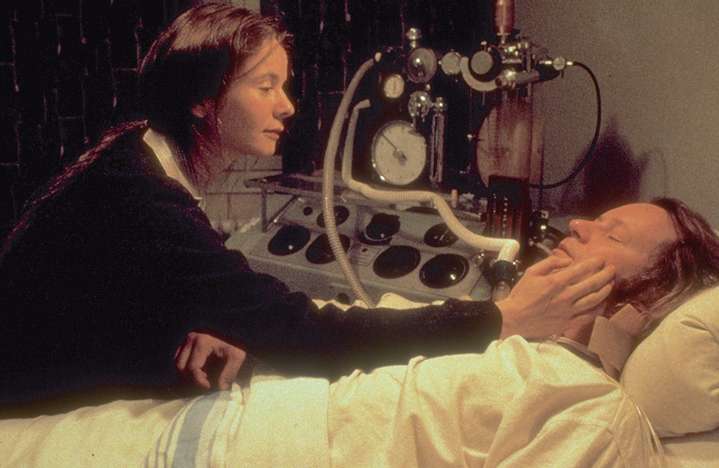 Man, if this isn't the most intense story we've ever come across. Extreme Calvinist devotion and dedication to the sacred vows of holy matrimony, all told through the lens of sexualized power relations. The box cover synopsis feels a bit misleading -- while the story does concern a wife's entrance into promiscuity in order to appease her newly-paralyzed spouse, the film is far more an Old Testament tale of isolated religious faith (a faith of both God and Man) than it is a sordid collage of stranger-lovin'. Lars von Trier's proto-Dogme realism makes things uncomfortable, but the film never feels exploitive, graphic, or manipulative, something I can't say for the only other von Trier joint we've seen (cue horribly depressing conclusion, cue uncontrollable sobbing).

I like how Breaking the Waves has my gray matter tied up in knots, but I ultimately think it's a bit of a failure. It's not Lars' fault, it'd be a Sisyphusian task for anyone to filmically realize the sheer gravity of this story. I will concede that the final twenty minutes are superbly effective and nearly make up for the shortcomings of the preceding 120.

Had Helena stayed on board we'd have had a completely different movie, and perhaps a better one. Emily Watson brought the provincial innocence like you can't believe, but I think Bess needed more of the crazy.
at 01:01
Labels: 1996, Emily Watson, Lars von Trier

Don't name your kid Lars unless you want him to be an asshole.