The nice tale of a lady born and raised to exact vengeance on the fellas that abused her poor mama. Classic Kill Bill-influencing stuff where the blood gushes from every wound until the precise moment just before it becomes absurd and the swordplay is no-bullshit spartan stabs and jabs. We're sure we missed out on the intricacies of seventeenth century Japanese culture, but them poetic subtitles sure were classy.
at 11:30 No comments:
Labels: 1973, Samurai

The guys who made this try to tell you it's about the nature of documentary filmmaking, but that's little more than a pretentious way of defending why their movie is a mockumentary about a film crew following a serial killer. "No...you see, it's all self-reflexive. " What a bunch of bullshit. 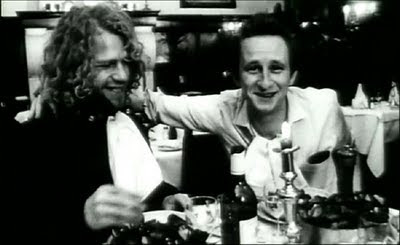 Man Bites Dog tricks you into thinking it's nothing but back and forth cuts between a maniac spouting his own self-important moral philosophy and his nonsense-free murders of the innocent, but as soon as our main character decides to save a bullet by giving an lonely old woman a heart attack you realize you're watching something too disturbing to be part of the Criterion Collection (which it is). Not long after that you'll get to this sequence where the stinking drunk killer and his equally sodden film crew walk in on an intertwined couple and proceed to abuse and dismember the both of 'em. That scene's probably the crux of the argument that this flick is about the sheer impossibilty of the documentarian's role as a neutral observer, but, Jesus, go watch something like Real Life if you want to stay to that idea without coming away feeling like you sentenced yourself to eternal damnation.

Benoît Poelvoorde sure does a good job, though.
at 18:08 1 comment:
Labels: 1992, The Highland Cinema is Decadent and Depraved

"People said his brain was infected by devils."

Among the finest lines of dialogue in all of motion picture history, and we're not just saying that 'cause Cage's "Agent Orange" has played nonstop since the dawn of the new year.

Not since we watched the Hills Have Eyes at the Regent Manor Cineplex all the way back in early '02 has a film so risen above and beyond our expectations, expectations that had incubated and festered within the very cockles of our bowels since late '94. Shogun Assassin is a treasure. It's the kind of thing that reminds you that "big" Quentin Tarantino's nothing but a cinematic Beck Hansen and reminds us that the cosmic wisdom of Joe Bob is so entwined in the fibers of our being that to emblazon the Drive-In Oath on our chests would be an exercise both trivial and insulting.

Yes, it's that serious.

Shogun Assassin is why the Highland Cinema broke ground in the first place. We exist only to satiate our need to hear a toddler narrate his tale as a killer-in-training, to watch as he remains silent onscreen only to matter-of-factly relate his memories of his father's endless evisceration of evil ninja hordes in the name of justice and loyalty. We've seen genius; it has the soaked look of an Earl Scheib drop cloth and the fiercely spiritual sound of the naive Eastern fetishism. Don't sleep on this one any longer.
at 01:27 1 comment:
Labels: 1980, Samurai 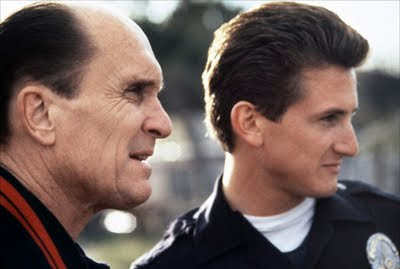 I am a nightmare walkin' psychopath talkin' king of the jungle just a gansta stalkin' living life like a firecracker quick is my fuse then dead as a deathpack the colors I choose red or blue cause a blood it just don't matter...