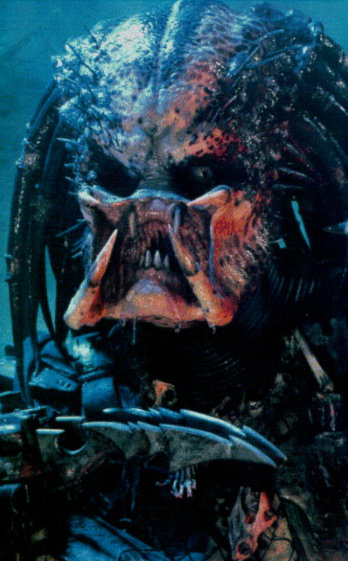 Y'know, "Predator" really didn't do it for me at first. I mean, I liked that opening grumblin' riff and cymbal crash, but those vocal lines during the verses just sounded so clumsy and awkward. But then in no time, I wised up and realized "Predator" was the greatest song by the greatest band of all time. Stick around? You bet.
at 21:44 No comments:
Labels: 1987, ArnoCorps

I really like how no one likes this movie and I fucking love it. So sad and so well shot. Thanks, guy who works for David Cronenberg!
at 06:54 No comments:
Labels: 2005

From Mars to Sirius is such a great record that now all I listen to is Archgoat, Dissection, and Cephalic Carnage.
at 06:53 No comments:
Labels: 2004, It's Rock and Roll and the Message Is...

Yeah, I'm not surprising anyone by saying we outsourced this to the 7th Ave cineplex, but we defend this post since it's the kind of thing the Highland Cinema loves. Since we're down with Herzog we were obviously down with Rescue Dawn even though we're not sure how triumphant we'd have found it had we not seen the documentary version first. The story in and of itself is rather amazing (pilot escapes from Laotian POW camp) and there's plenty of beautiful camera work to keep cinephiles amused, but if we were unfamiliar with Dieter Dengler's pre-war biography we'd probably find his harrowing jungle trek embellished, unbelievable, and utterly preposterous. But as it stands, we think this the Dawn works awfully well as a Needs to Fly companion piece, but if it ever came down to a Herzog-filmed Dengler-themed Thunderdome we'd know the documentary would exit unscathed.
at 06:42 No comments:
Labels: 2007, Werner Herzog

Hahaha. That picture's gonna give you nightmares.
at 06:42 No comments:
Labels: 1986, David Cronenberg

What's ArnoCorps' next move? I mean, what's left? Red Sonja, Red Heat, the comedies. Bulletin rumor has it that they have a brand new tune about themselves as ballsy action heroes, but will more songs like that fit into their Greatest Band of All Time image and ancient Austrian folklore ideal? It seems that perhaps the next tract for the band might be to tackle the various catchphrases and leitmotifs rather than the actual films themselves (as demonstrated in "Crom Strong on His Mountain" or on the website's constant demands to "Stop whining"). That method should help retain the aggressive rock qualities the band requires while still allowing them more lyrical possibilities. That said, at this writing the future of the band is far less important to me than is the current status of their online merch sales....where's my shirt, dammit?
at 13:23 2 comments:
Labels: 1991, ArnoCorps

Jonathan Richman -- Take Me to the Plaza

I spent my whole day in my Motel Hell t-shirt and my whole morning frothing about the heartbreakingly ferocious genius of Pig Destroyer, but the minute I saw Jonathan Richman I wanted to cry the sweet tears of sappy nostalgia. Yeah, I know I already told you this.
at 12:56 No comments:
Labels: 2002, It's Rock and Roll and the Message Is...

In the tenth grade I don't think I listened to anything but Dinosaur Jr. By the time I was out of high school all I didn't listen to anything but Gwar or eat anything but Taco Bell and if I was going to listen to some fucking weenie music it probably wasn't gonna have J Mascis' tired drawl in it. Sure, I'd still play a Dinosaur Jr disc every now and again, but it never meant as much since I spent the entire time convincing myself my enjoyment was little more than learner's permit nostalgia. I didn't honestly like J's voice or that awful classic rock engineering, did I? This pattern continued during the subsequent years and even after I was well aware that 2000's More Light was the best thing J had ever released and was also one of the greatest records of all time. But in spite of all of that, I still couldn't come to terms with why I liked Dinosaur Jr in the first place. Somehow down at the foundation of all those years of cranking these albums the only thing I could see was a 14 year-old's pathetic attempt to instill in himself an indie rock credibility seven years past its prime. So there was me in my twenties questioning the validity of my musical taste from a time when even shaving was years away; the adult me embarrassed by the mere chance that maybe, just maybe, one of my most important bands didn't even earn that title, and instead had it unconsciously bestowed upon them by a teenager trying to be cool. How could I trust myself? I thought. Are all of my judgments potentially worthless? What kind of person would be so easily persuaded by Micheal Azerrad?

But then one day as I sat in the car listening to Free So Free I came to the conclusion that it really didn't fucking matter why I liked Dinosaur Jr, and that there was no point in debating whether or not my enjoyment was genuine or to what extent it was at all. All these songs were just a part of me, they were in there for good. I couldn't shake 'em and why should I want to anyway? They were good songs, dammit, and if they consistently meant something it shouldn't matter what that something was.

The Amazing Adventures of Pleaseeasaur The only things we find funny are Spaceballs, Spinal Tap, and cats in sunglasses. Oh, and apparently the Pleaseeasaur! Witness the genius of their infomercial tunes about ramen noodles and the local tv newsteam. Yes, the 'Saur is so earnest in their goofery that we can't help but find ourselves in stitches.

And they put sunglasses on a cobra!
at 14:23 No comments:
Newer Posts Older Posts Home
Subscribe to: Posts (Atom)