Back when we were nine our camp counselor told us once we were older we'd think Mad Max was the best of the trilogy.
We still think the The Road Warrior's better.
at 23:12 1 comment:
Labels: 1979

We saw this in high school and thought it was stupid because we were idiots. We also saw a shitty video transfer. But now we're super sophisticated and we have a bright 'n shiny new and improved print. "So what's all that mean?" you ask. Why...

Basket Case is the greatest movie ever!
Well, at least really darn good. So good we're putting it right at the top of the Cinema's chart. In league with Dead-Alive and Street Trash and, we dunno, King of the Kickboxers or something. Basket Case is top notch drive-in, made at a time when shootin' on film and peddlin' to sleazy theaters was on its way out and VHS and scrambled pay cable was bursting through the door. Director Big Frank Henenlotter really knows his shit and it shows. A crazy story, some late nights, and a few outlandishly bloody deaths are all anyone (errr...we) needs to have a great time and that's exactly what this flick delivers. We're so smitten we think we're finally gonna watch the two Case sequels. They were made ten years later to cash in on a decade of video store hype wethinks, but we don't mind one bit. Can you say "exploitation?"

Hey, and here's an interesting side note: the day before we watched this we finished a book on a boy's medical penis mishap. And then we read Paul Auster's book on coincidental anecdotes. How about that? A botched surgery tome followed by film of Siamese twins? That's a coin-ki-dink all by itself!
at 00:25 No comments:
Labels: 1982, Frank Henenlotter 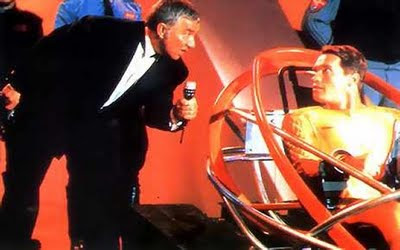 The best Arnold films don't always translate into the best ArnoCorps songs. The Running Man is such signature Cinema that it'd be a nearly impossible task for any song to measure up. "Running Man" has some nice guitar interaction and follows a similar narrative arc as "The Terminator" inasmuch as the focus relies solely on Ben Richards' plight and attitude rather than attempting to capture each and every plot details. Lyrically, it sticks straight to the facts -- Richards' set up for a slaughter of the innocents, the Running Man's premise and relation to an oppressive, exploitative "is it media or is it government?" controlled society -- and it is for this that we can appreciate the song. "Running Man"'s downfall, however, is that in spite of its sing-along chorus, it never reaches the anthemic nature of an "Last Action Hero" or the crushing aggression of a "Predator." It is for this that it will be forever be a lower-tier 'Corps product.

Wow, what a shitty movie. The only part we liked was when Thomas Jane is so hopeless about man's survival that he shoots and kills his own five year old son only to witness the military's containment of the bloodthirsty alien hordes minutes later. Wah wah. Too bad, huh? We know that's the end of the movie, but what the fuck? You don't want to see this.

We also liked that part where the cocooned MP falls to the ground and hundreds of baby spider monsters burst out of his chest cavity. But the rest of this movie was so lame that we had to amuse ourselves with the fact that Jane's character's surname is Drayton (like Flavor Flav) and the film's co-star is William Sadler (surname of The Bomb Squad's Eric "Vietnam").
at 13:46 No comments:
Labels: 2007, Stephen King
Newer Posts Older Posts Home
Subscribe to: Posts (Atom)