Death Bed -- The Bed That Eats

So the guy who made this thing claimed he forgot all about it until he read some dude's fawning message board post twenty-some years later. We find that pretty hard to believe. Death Bed, however, is equally as hard to believe and way way stupider! It's about -- and are you ready for this? -- a bed that eats! Just like it says in the title. Weird thing is, this bed doesn't really eat, it just kinda dissolves people in this Piss Christ solution. Oooh, except in that one scene where it sends a sheet across the room to reel in a helpless victim.

We know that sounds so cool you've already added it to your NetFlix queue, but Death Bed is really fucking weird and cheap, and it's totally fucking worthless -- we shouldn't've spent our time on it and we know we'll be talkin' about it for the rest of our natural lives. The sad part about this one is really that it coulda been so much more. A bed that eats! Come on, how great! Why didn't they set it in an fleabag motel instead of an abandoned farmhouse? Why did they spend all that time telling us the bed was a lovesick demon who lived in a tree and then became the wind and then turned into a four-poster Victorian canopy? And did we mention there's a nineteenth-century ghost who communicates with the bed in a corny Bri'ish accent? Yeah, he lives behind the painting. 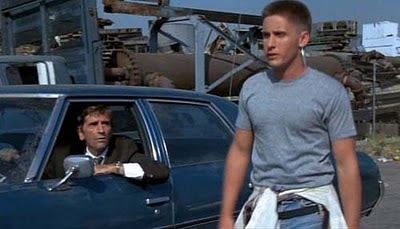 loudQUIETloud -- A Film About The Pixies

loudQUIETloud shows us one thing and one thing only: the Pixies had no business reuniting whatsoever. We think Frank Black and company are a sonic equivalent of junior high -- simplistic and pretentious and full of an exuberance that's equal parts annoying and naive. Ugh. We don't get it. "Crackity Jones"? A superhero named Tony? Give us a break. Now we know a little something about revisionist nostalgia, but there's certain bands we think have no business being the Don't Look Back honorees they are today. This distaste may have you wondering why we wanted to sit through this in the first place, and while, yeah, we think "Debaser"'s pretty cool, we honestly think we wanted to add more fuel to our "Pixies suck!" diatribe. And we think loudQUIETloud came through in that regard. It's not so much that we hate these guys or think they're incompetent, but there's no reason for anyone to get excited about watching this. You like the Pixies? Great. Here's ninety minutes of them not interacting with each other at all! Look at shirtless Frank Black give a phone interview. Here's the Deal sisters sitting on their Winnebago. Here's Joey Santiago on his iMac. No two people in this movie have anything in common at all. We think a better movie would have just been about drummer David Lovering whose Nye-informed magician schedule was put on hold so he could embark on this lucrative reunion tour.
at 11:18 1 comment:
Labels: "Documentary", It's Rock and Roll and the Message Is...

Like a James Ellroy book filmed by the Coens, only much worse and horribly pointless. We liked watching Fred Ward chew the scenery and Alec Baldwin play a violent, incompetent, DeNiro aping villain, but the updated film noir vibe fizzled out after the first reel and by the final twenty we felt like we'd really been cheated into sitting through something that shoulda been left on the shelf.
at 17:51 No comments:
Labels: 1990
Newer Posts Older Posts Home
Subscribe to: Posts (Atom)