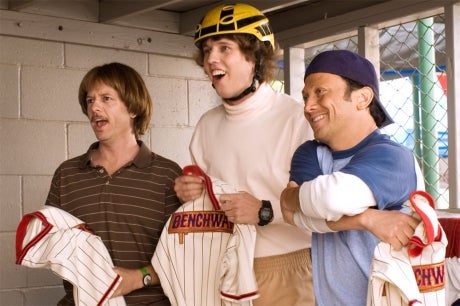 Dude, this was fucking dumb. I know you heard me laughing aloud, but still....this was really goddamn stupid.

But have you guys seen Happiness? No? It's an uncomfortable one full of mucho sadness, pain, and, uh, stickiness, but there's this opening five minutes where Jon Lovitz gets dumped just as he's about to give his special lady this engraved silver ashtray thingy and it's just fucking amazing. No joke, that shit is way close to Alec-Baldwin-in-Glengarry-Glen-Ross amazing, and certainly better than Ben-Affleck-playing-Alec-Baldwin-in-Glengarry-Glen-Ross-in-Boiler-Room amazing. You'd never know it, but underneath those sandwich ads and "that's the ticket!" catchphrases the Lovitz is a real deal actor.

In Benchwarmers he drives the Batmobile and has a robot butler.

What about robot pants.

Now if the robot dispensed PBR instead of sandwiches this would have been amazing.

PBRs and sandwiches would be cool, but nothing would beats Natty Ice Reubens.