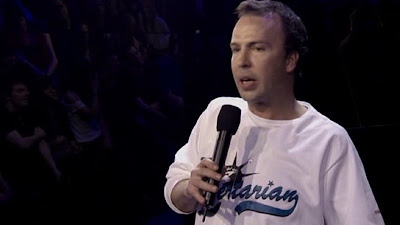 Like everyone else I've always enjoyed comedians. I remember lying in bed watching Comic Strip Live on Saturday nights, downloading the audio for Chappelle's Killin' Them Softly off Napster (I didn't actually see the video for another three years), and talking close personal friend Chris Daly into driving me around for an extra forty minutes just so we could listen to the rest of Skanks for the Memories in his car. But over the past two years I've decided that I don't just like stand-up comedy, I love it. It all started in February of 2009 when Matt Timmons told me I should listen to Adam Carolla's new podcast. I'd been listening to Fresh Air and The Sound of Young America for a few years by then, but hearing Carolla's show changed everything. I remember sitting at work hearing Carolla and David Alan Grier bullshit for an hour, Grier telling stories about his parents' divorce and how his psychiatrist father wrote Black Rage, and all of the sudden I realized how much was missing from my life. From then on, all I wanted was to have clever conversations with smart people, reference Billy Jack with 40 year-olds, and have a dad who penned a treatise on Black Power.

I spent the rest of that year listening to every episode Carolla put online. And then when I got tired of that I switched to Marc Maron's WTF and Greg Fitzsimmons. I spent the entire summer listening to Bill Burr's Monday Morning Podcast, and anytime I had two and a half hours to spare and a hankering to hear about DMT and pornography I didn't hesitate to download the latest episode of The Joe Rogan Experience. Comedy has really spoken to me, and it was all because of the podcast medium. Thinking about it made me realize that what I like about stand-up had nothing to do with wanting to laugh and everything to do with the comedians themselves. I liked their miserable and bitter lives, so full of loneliness and 12-Step Meetings. I liked their failings with women and their arguments with...everyone. It all made sense to me, and I could relate to nearly all of it.

So for the past two years this enthusiasm has turned me into a bit of a lunatic myself, drunkenly haranguing friends and family with tales of my own self-loathing and non-romantic non-entanglements, every minute of every one of these debacles I fantasize as training sessions for my own Evening at the Improv. I know it's after last call and we're standing on the corner outside your building, but in my head I look like Rick Shapiro and sound like Bill Burr.
at 15:06
Labels: 2007, Stand-up Stand-up