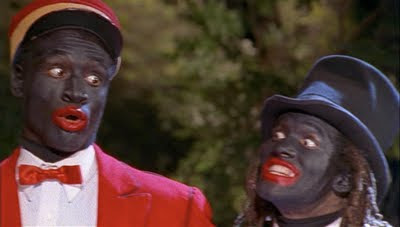 Spike Lee did one good movie. This isn't it.

I saw this right when I turned 20 and it made me feel so enlightened the way it had me thinking everything I'd ever enjoyed did nothing but perpetuate hateful stereotypes. The older I got and less undergraduate I became, the more I thought a second time around Bamboozled viewin' would annoy the living bejesus out of me. And sure, Spike approaches Mencia-like territory the way he dumbs down and then ad nauseumly reiterates the cultural commentary, but I was quite impressed that I didn't want to throw things at the tv like I thought I would. That the offensively simplistic satire is the point doesn't necessarily make it digestible or effective, but the whole thing was strikingly less painful than the me of 2007/nascent '08 expected it to be. Thankfully there's some real power toward the film's end and a couple of great performances by Cinema fave Tommy Davidson and co-leading man Savion Glover.
at 22:08
Labels: 2000, A Spike Lee Joint, Some of My Best Friends...