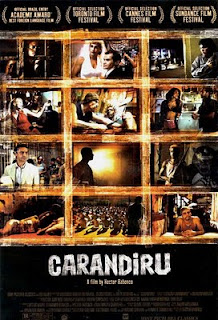 There's this guy on the Electrical Audio forum who has the Pixote poster as his signature. That means that three or four or (most likely) five times each and every day I see that weird lookin' movie pic with the even weirder lookin' kid staring at me. Eventually I figure, shit, I oughta look up this Pixote flick to see what the deal is, and thanks to the magic of these here Internets I find out it's a critically acclaimed picture about Brazilian street kids! Real life kids plucked right off the street and told to play fictionalized versions of themselves just for your viewing pleasure. "Whoa, sign me up!" I said.

Unfortunately, the US of A has yet to make this one available on the home market.

But, hey, that's no prob, right? Resourceful guy that I am, I decide all I need to satiate my filmic favela fever is some of them other flicks directed by Hector Babenco. Surely he'd have something else (and something easier to find) that'd help me pass my time. So I click on them imdb hyperlinks and settled on 2003's Carandiru, a picture that I thought would be all about the 1992 Sao Paolo prison riot so famous Sepultura wrote a song about it. Problem is, this movie is more a fictionalized account of fictionalized accounts of some of the inmates and their woeful stories of poor heat of the moment decision making. Turns out only the last half-hour involves the Policia, the rest of the thing is the noble tale of a doctor who wants to quell the HIV wildfire, the sweet tale of a guy who marries a drag queen, and the sad tale of a nice kid who shot some guys that messed with his sister.

So, yeah, I was a bit disappointed. I mean, wouldn't you be? Keep in mind that Carandiru is still a pleasant way to spend your IFC-viewing time. It's got lots of over-saturated lighting and sweaty overcrowding, and with all its dingy prison stuff and subtitles you're bound to feel better about yourself, like you're real smart and liberal and you actually care about the plight of foreign peoples and the charisma of their not-so-different-from-us cultures. And as an added bonus, this flick is tame with the brutality so you won't feel like a total scumbag!
at 23:22
Labels: 2003