Willem Dafoe and John Turturro in the same scene. Take that, Heat! 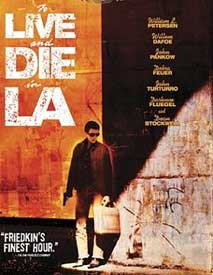 Okay, this was another lame screening at the Highland Cinema. In spite of the fact he insisted Wang Chung score this flick, Billy Friedkin is still a favorite of ours. He could do no wrong for a good coupla years, but, man, did he ever lose it. Not as bad as the Copes, but still...

We also gotta give props to Billy L. Petersen. Talk about a shoulda-been go-to guy for them 1980s cop roles. So good in that movie that was later remade into a revisionist Lechter flick, but then...The Contender?!?!? Hmmm...quite the familiar arc. I'm sensing a trend here. Watch out, everyone else from this movie: you will start oh so cool and end oh so lame! At least Steve James left our sad and beautiful world before he turned into a shell of his former self. Rest in peace, my brother.
at 18:22
Labels: Billy Friedkin

Rent "Blue Chips" instead. Billy F's this one up with the 80's date stamp.