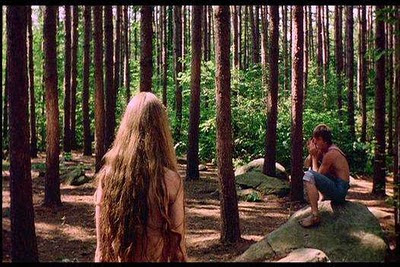 Finally saw this and only watched it for the Joe Bob Briggs audio commentary 'cause, well, let's be honest here, John Bloom is a bona fide genius. And when I say "genius," I of course mean that Joe Bob Goes to the Drive-In single-handedly changed my life.

No, really. My life. Come on, let's check them Highland Cinema/JBB stats:
I Spit on Your Grave is thirty years old and even with all of the overwrought, overblown critical hoopla that the film carries with it, and even with all of the signature Joe Bob analysis and pre-Information Superhighway trivia, this flick is still as uncomfortable and squirm inducing as anything that's come out before or since. Defending it will make you feel like a real jerk, but I think we oughta hand it to Meir Zarchi and Camille Keaton for wholeheartedly committing to a movie that's not about much more than castrating rapists and taking 'em to task with the business end of an outboard motor. I'm not sure I would have "enjoyed" this picture without Joe Bob's voice talking up the camera's feminist gaze, detailing the resumes of every last actor on the screen, or taking apart Siskel and Ebert's oft-mentioned lambasting of the film piece by piece, but I had all of those things and I came away with an even greater appreciation of the finely-crafted Briggs persona and half a mind to send What Have You Done to Solange? to the top of the queue.