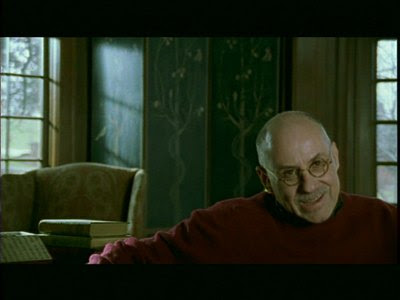 Man, Ellroy's fucking great, ain't he? It's rare we come across an author who can affect us so profoundly, but when we read My Dark Places we knew we were onto something goooood. The guy's a goddamn beast, pure and simple. His tone is flawlessly brilliant, brutal, and oozing with a cynicism that's as pragmatic as it is malicious. Every novel comes with a plot only a hair shy of the unnecessarily complex, but one that's wound tighter than a drum.
Feast of Death is courtesy of our friends at the BBC. It's a nice piece that amounts to little more than Ellroy riffin' about his aforementioned memoir* and his 1987 hard-boiled crime novel The Black Dahlia** for a too-short ninety minutes. Our favorite author spends the screen time chewin' the scenery and leanin' in all close and serious-like while he's talkin' his no nonsense Mike Hammer speak with some paunchy off the job detectives as they dine in a swanky Hell Lay restaurant. He retells his own gnarly history and accentuates his haunted and obsessed connections between one Jean ("Mom") Ellroy and one Elizabeth ("hot mama") Short. Then, right as you think the whole thing's done and over, he tops the whole thing off with Larry Harnisch, a reporter so equally consumed by the Dahlia case he claims he uncovered the killer's identity! Whoa!

In short: captivatin' stuff. We couldn't have been happier.

Now go read a book, dammit. Might we suggest:

* My Dark Places, of course -- the tale of Ma Ellroy's murder, Son Ellroy's descent from broken-home child to panty-sniffing bottomed-out drunk, and how a publishing advance paid for a brooding author and a retired LAPD dick to reinvestigate a forgotten woman's unsolved case some forty years later

**about, well, the Black Dahlia...that and a veiled examination of one man's obsession with mysterious mutilated women [see above]
at 18:33
Labels: "Documentary", 2001